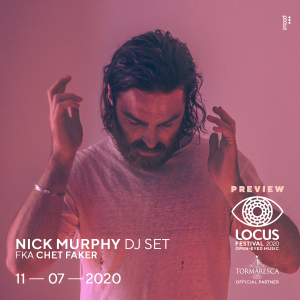 Nick Murphy’s DJ set is going to be Locus 2020 opening party, with musical performances, visual arts, a tasting session of wine and local cuisine and
guided tour of the company, starting at the sunset in a suggestive natural scenery at the foot of Monte Vulture.

As he recently hinted on his social media, musician Chet Faker has given up on his alias to compose, produce, record and perform
with his real name, Nick Murphy –  marking a significant musical evolution for the artist.
Murphy’s major successes as Chet Faker are many. His critically acclaimed debut album “Built On Glass” has reached commercial success after the release in Spring 2014,
easily becoming platinum. BBC Radio 1 has constantly supported and sponsored his solo album, along with his collaborations with Marcus Marr.
Nick is a very serious musician on an international level, selling out all his tours and performing the  major festivals circuit in Europe, Asia, and North America, including Glastonbury, Primavera
Sound, Coachella, and many others.Tickets are already available on Dice app, in a limited quantity for 25,30€ each.