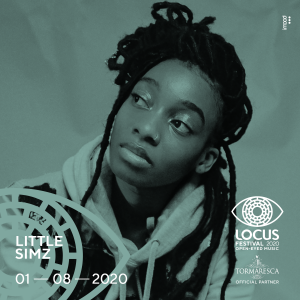 After Paul Weller, another British main act announced for Locus Festival’s XVI edition. Little Simz represents a new sound for a whole new generation of grime and rap made in the UK: her masterpiece “Grey Area” is one of the best albums of the year, and explores the great black music tradition. Early Bird Tickets available for the first two weeks on DICE app.

2019 is not over yet and we already have two main acts announced for next year’s Locus Festival edition, taking place during the weekends between the 25th of July and the 15th of August, with big international names along with other cultural activities.

Paul Weller on the 25th of July and Little Simz on the 1st of August deeply reflect the wide musical spectrum between concerts, well expressed by this year’s claim. “Open Eyed Music”, for a real collective and cultural experience in one of the most beautiful Italian villages: Locorotondo, in Puglia, in the heart of Itria Valley.

With 2019 album “Gray Area”, the 24-year-old Londoner Little Simz brought her success over the national borders, opening new spaces and outlooks for international black music with her grime sound.
Praised by artists such as Gilles Peterson and Kendrick Lamarr, she’s been chosen as opener for Gorillaz, Anderson Paak and Lauryn Hill’s shows;  starring also in Netflix’s Top Boy, releasing several EP’s and albums since 2014…  Little Simz arrives at Locus festival in 2020, at the peak of her artistic career.

A show that carries on, with a brand new language, the same musical attitude brought last year at the festival by Ms. Lauryn Hill.  From the streets of London, Little Simz represents a new generation with a new sound, meeting the classic Black Music’s tradition.