PAUL WELLER! The “modfather” is the first headliner announced for Locus festival 2020: live in Locorotondo 25th july in Masseria Mavùgliola 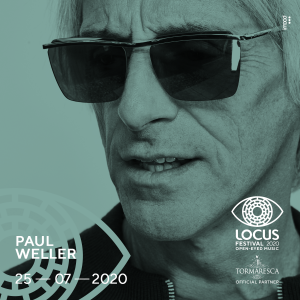 Locus Festival’s sixteenth edition will take place during the weekends between 25th of July and 15th of August 2020, once again embellished by great names from the international music scene, along with many other cultural activities. The first name announced: Paul Weller, exclusive southern Italy show on the 25th of July in Locorotondo, Masseria Mavùgliola.

Tickets for Paul Weller’s show and all other events of Locus Festival are available on DICE.fm, a newly innovative ticketing platform on smartphone and mobile

Locus festival audience will have the opportunity to witness live the eclectic talent of one of the main acts of the MOD culture. Starting from punk, Paul Weller went through acid jazz to experiment new sounds after going solo, between op, folk, soul and even electronic territories. This incredible experimentation capacity emerges in Weller’s flourishing discography, starting from 1992 and publishing as many as fourteen studio albums: the last one, True Meanings (Parlophone Records), was released in 2018.

British singer, guitarist, and composer, Paul Weller is a real institution in his homeland: most of the lyrics of his songs are inspired by English culture. His recording debut took place in 1977 with the publication of In The City (Polydor Records) with Jam, the band he fronted reaching the top of the English charts several times. In 1982 he founded Style Council together with keyboardist Mick Talbot, exploring the boundaries of acid jazz.
Once this experience ended, Paul Weller started a successful solo career, praised both by the public and critics.

Tickets for all the paid events of Locus festival 2020, will be sold only through DICE, a new mobile app for smartphones and tablets. For its 16th edition, Locus is the first major Italian festival to join this innovative Ticketing platform.  Arrived in the Italian market only a few months ago, famous English app DICE is a live music ticketing and discovery platform, internationally known for its innovative technology, ease of use and for the fight against secondary ticketing.

To find more about the simplicity and advantages of this new system, download the app here: